Mid week we drove to Yamba (about 1 1/4 hours from where we live) to visit my husband's parents. Here's a little about Yamba http://www.yambansw.com.au/main.html

"There are two theories as to the meaning of Yamba, one being that it is the local Aboriginal word for "headland". However, J.S. Ryan, following R.L. Dawson's early 'Recollections and Records of the Clarence Aborigines', believes the most likely derivation is an Aboriginal word 'yumbah' meaning a rough edible shellfish the size of a man's hand that clings to rocks and is similar to an oyster."

We drove through Maclean - an area that is well known for growing sugar-cane. The sugarcane fires at night can be spectacular!!


We watched the Anzac Day rugby league match http://www.smh.com.au/photogallery/rugby-league/league-news/roosters-vs-dragons-anzac-day-match-20130425-2ih05.html My hubby goes for the St George Dragons and was a little sad they lost :-(

http://www.taste.com.au/recipes/536/giant+anzac+biscuits#  Here is the recipe for anyone interested - they are yummy!!

The next day we drove down to Yamba Beach and had morning tea at Pippie's cafe.

Then checked out the memorial and cenotaph for local soldiers who went to war. Seeing the old men who fought in the war and what they must have gone through always brings a tear to my eye.
On our way home we stopped into a fish shop as hubby is going fishing for blackfish tomorrow in Urunga. The marina is beautiful with all the boats and we saw some egrets and pelicans. 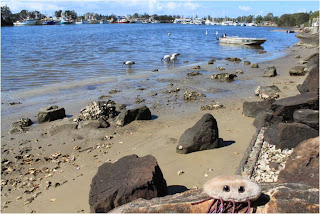 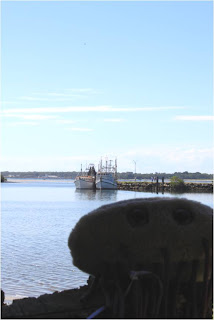 Now Riki is helping me finish off some crafts for a swap!! Hope everyone is having a as great a weekend as we are!!

Posted by whenindoubtsew at 5:33 PM