I think most people in Sweden care one way or another. I'm old enough to admit I do :) After a lovely birthday party for my two year old niece I decided to stay and watch the show with my family. We're watching and cheering for Loreen in the voting. 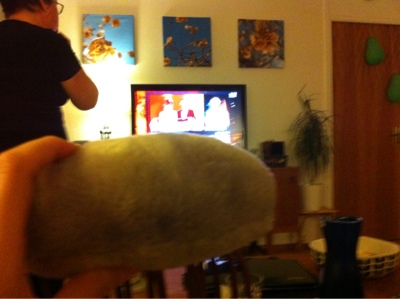 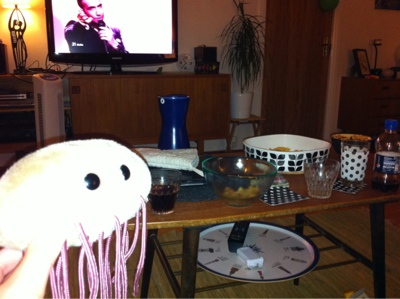 Posted by Annchen at 2:47 PM No comments:

I've had a few bad weeks lately, mainly because of too much stress. Riki have helped me recover by dragging me out for walks and cache hunts. Oh, and she's helped with everyday things... I've had tons of free time since my doctor told me I should stay at home from work, at least for a while, but not very much energy. It's good to have a bored E.Coli at home. I need to do some things and entertain my guest!

Monday night fun... Well, at least I had good company. Every other week it's two needles, and the other weeks it's just one.
I did some fun things earlier on monday too. Riki helped me find a mystery that I had been puzzling over for a while. There are caches that contain clues in the area and when I had finally found the last one (and found a less than helpful clue) I decided to see what I had so far. It's been fun, since I needed to find out trivia about my newhometown, or part of town. I had to guess one of the numbers for the cordinates so I had two possible places to look. After a lot of walking because of muggles and some strength and stubbornness we found it!

Today I went back to the doctor and he told me to stay home one more week, but that he thought I could go back to work after that. I think so too and it feels good. A friend kept me company today and we decided to go release some books. There's a cafe in a nearby shopping centre that has a bookshelf with free books so we put the books among them. The regular catch rate (ie. the books you ever hear from again) is about 10% and free bookshelves isn't my "luckiest" location, but I'm sure they will be read and enjoyed even if I never hear about it. After lunch and sneaky book release we decided to walk home from cache to cache. The first one was near a playground.

We actually found all three caches we were looking for, and we got to see a really neat playground and a beautiful park in the process. This next picture is a weird tree from the park.

Posted by Annchen at 2:44 PM No comments:

We really needed to get out of the house yesterday, and we also needed some kind of curtain to give us a bit more shade in the living room and to make it darker in the bedroom. To the hardware store! After deciding on a few different roll down curtains in record time Gustav wanted to take a look at the selection of grills and barbecues. He's plotting an outdoor kitchen on the upstairs balcony... The ones at the hardware store were pretty overpriced so we just looked. Riki found a ridiculously pink one =D


After a trip to two different electronic stores that were out of iPads we needed food. I had a plan that involved food, some sightseeing and caching... The Vega grill! We tried their sambal burger, a homemade burger with a bit of spice to it. It was topped with béarnaise sauce and dried onion. Perfectly toasted bun... *droool*

A fun feature was a cabinet with commemorative plates with the names and amount of burgers eaten by the record keepers. I'm far from that gang since I couldn't even finish my one burger.

I've visited the same cache earlier, but I couldn't find it back then. Clever camouflage fooled me last time, but yesterday I spotted part of the mechanism that it hung from so it wasn't hard at all. When I grabbed the cache to log it a woodpecker landed in a tree above. It sat there pecking the whole time, not minding us at all. Log entry with a picture of Riki.
Posted by Annchen at 12:10 PM No comments: