Well we finally made it. Hubby and I took a day off together and drove down to South West Rocks to look around Trial Bay Gaol and the surrounds. It is a great place to visit and very interesting.

Trial Bay Gaol was established in 1876 as an experimental Public Works Gaol where the inmates would construct the breakwater. It took ages to build due to the difficulties in cutting the rocks to build it and closed in 1903. After that is was used for a couple of years during WW1 as an internment camp.
http://www.migrationheritage.nsw.gov.au/exhibitions/zivillager/history.shtml
http://www.afloat.com.au/afloat-magazine/2012/february-2012/Trial_Bay_Gaol#.UkKnuoZmj0s 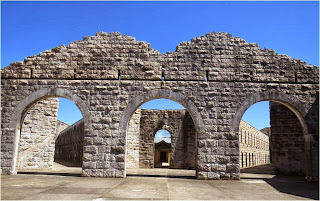 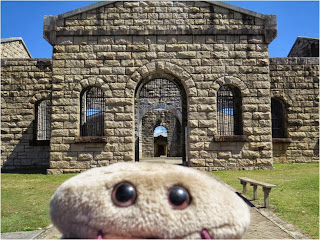 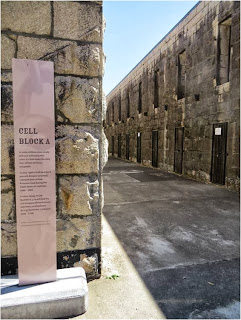 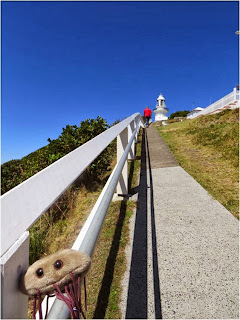 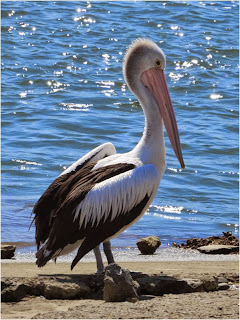 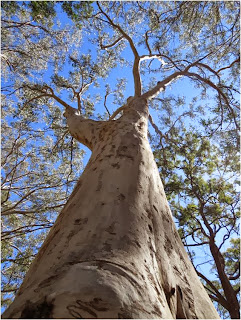 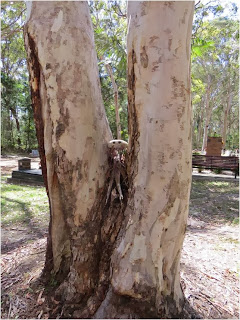 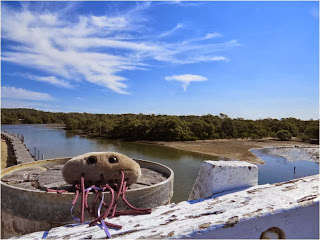 Hubby took Riki to work with him today and found a scarred tree. These trees have scars from where Aboriginal people cut out a section of bark to make canoes, shelters, shields and containers ('coolamon')

And I am  a bit bummed at the moment as I have the flu but the Coffs Harbour Buskers Festival is on at the moment. Here is a link to the home page with some videos http://www.coffsharbourbuskers.com/,

Well it's almost time for Riki to go home :-( I can't believe the 6 months has gone so quick. Hopefully she has lots of great memories!!
Posted by whenindoubtsew at 2:29 AM No comments:

Last weekend we visited some friends who live on a beautiful property. There was also a birthday involved :-). Now a property needs some maintenance and undergrowth needs to be cleared to decrease fire risk. Which is ironic as once the undergrowth is cleared our friends have a bonfire!! They set up a lounge on the back of a trailer for viewing in comfort. 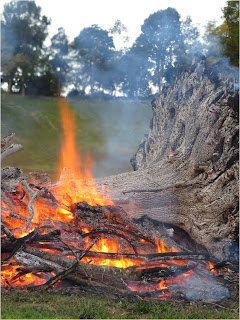 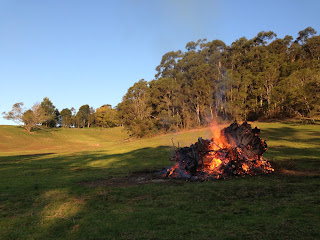 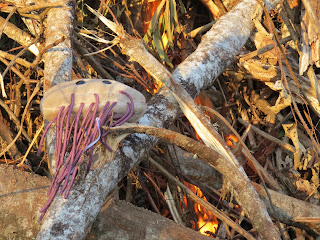 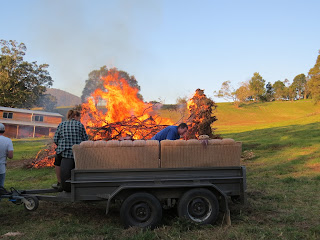 Today we went to visit our in-laws as it is Father's Day in Australia tomorrow. We had breakfast at Ferry Park Cafe Restaurant and Gallery - I took the opportunity to take some photos of the historic sugar can barge and ferry which apparently will be removed soon and taken to the dump.

"The old Ashby ferry (commissioned in 1936) and the cane barge (Cane Punt No 6) at Ferry Park, Maclean, which are listed as heritage items under the Clarence Valley Local Environment Plan 2011, will be removed.
Both the ferry and barge are also listed on the Australian Register of Historic Vessels.
There have been moves in the past to restore the barge.
In April 2009, the council resolved to allocate $40,000 towards its restoration and the construction of a roof over the barge.
Subsequent to this decision, in March 2010, the council received a $5,000 Australian National Maritime Museum (ANMM) grant that resulted in the commissioning of a conservation plan to direct the ongoing preservation and restoration of the 64-year old vessel.
Built in 1946, the steel-plated cane barge, which is listed on the ANMM’s register of historic vessels, is thought to be the last surviving example of the barges that transported sugarcane on the Clarence River, according to the ANMM.
The ferry is “one of the few remaining examples of the large number of cable ferries built for river crossings around Australia during the 1930s, ’40s and ’50s”."
http://cvreview.com.au/heritage-listed-ferry-and-cane-barge-headed-for-the-tip/
A little bit about sugarcane (which is grown and harvested in many places in the Clarence)
http://www.clarencetourism.com/media/docs/sugarcane.pdf

"Maclean is very proud of its Scottish Heritage. Every Easter the clans invade the township for the Annual Highland Gathering and the Scottish tradition is highlighted by the fact that the township has the oldest Free Presbyterian Church in Australia. To portray this connection, a number of stones from both Scotland and Australia have created a large Scottish Cairn overlooking the Clarence River.Many street signs also carry the Gaelic translation of the name and at least one local hotel advertises that hagis is available for breakfast.
Maclean is also the gateway to Australia's Sugar Country and celebrates this connection in September with the Cane Harvest Festival.
Maclean also hosts the headquarters for a large prawn trawling fleet that works the Clarence River from Ulmarra to the mouth of the river.
Places to visit whilst in Maclean include the Scottish Cairn, the Maclean Lookout, The Pinnacle and the Bicentennial Museum." http://www.nnsw.com.au/maclean/tourism.html 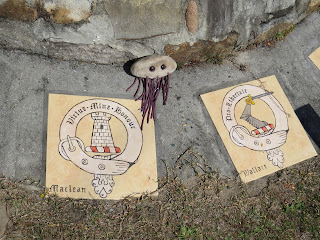 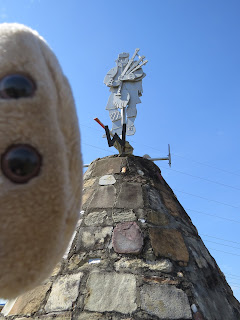 We then went back to the family home and I tried out the zoom on my camera with some flora and fauna :-)
Tomorrow we will be checking out the CraftAlive show!! http://www.craftalive.com.au/

Posted by whenindoubtsew at 5:03 AM No comments: