I had the day off today, so after finishing the boring things I had to do (like laundry) we took the bus and train downtown. Hubby was done with work early too so he decided to join us. After meeting up with a friend at the station we went to wakamama for some lunch. Ramen! :) The food was good but the music was too loud for me.

After being properly fed we went for some shopping and a bit of caching. We visited my favourite teastore on Drottninggatan. The store tiny, but it's crammed full of good tea (much of it ecological), and the lady running it is a real tea enthusiast so there's always a good story about every tea you buy.

Another interesting store in the neighbourhood is Stockholms Aeter & Essencefabrik. They sell spices, eteric oils, flavourings for liqour and all kinds of interesting stuff. Gustav (hubby) got some ingredients for making glögg (mulled wine) according to an old pharmacy recepie.


Last but not least... I've come to understand that fika is something very Swedish, so I had to let Riki do it sooner or later. We needed a break after shopping and finding a cache so we went to Vetekatten, a well known café in central Stockholm. We decided to leave a bookcrossing book on the table when we left.
Posted by Annchen at 12:45 PM No comments:

It was really nice and sunny weather today, but it's still cold outside. Still, it wasn't too windy and it didn't snow so we decided to take a trip to central Stockholm. We had friends visiting and they wanted to try to get some good rice so we decided to combine fun with rice-hunting.

We took the bus and then the subway to Gamla stan (old town). There's a great bookstore there filled with all things geek. It's called the Science Fiction bookstore, but they have fantasy, anime, manga, movies, tabletop games, card games... A little bit of everything.

Next we went to Stortorget (The great square). It's not a terribly big square but it's Stockholms oldest. This is where the Stockholm Bloodbath took place. We investigated the large well building. It's no longer working but at one point it must have been a very important feature of this square.

The well on this square used to be the middlepoint used to measure the distance to Stockholm on the roads going to the capital. The well dried up long ago (it was built 1778), but it still stands as a decorative piece on the square. Neat lion heads, huh?


Next stop was the The Royal Palace. We didn't wait around for the changing of the guards, but the building is pretty impressie in itself. 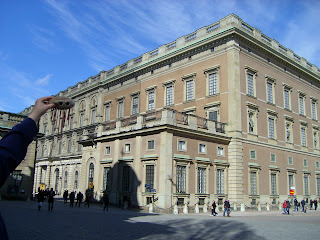 When we arrived at Riksdagshuset (the parliament house) we were starting to get cold and hungry so we didn't get many fun pictures. (might add those I took later)

After lunch at a somewhat sketchy italian restaurant we started the quest for the perfect rice. I'm not too picky about rice but my friends eat mostly Chinese food and it's a different matter if you want to eat with chopsticks. I think we went to four or five different places before finding rice that was fit for their tastes, and we picked up a lot of bits and bobs on the way.

Easter is a busy time in a large supermarket, and it's no less busy in the pharmacy in it. Riki is with me at work and sometimes it has its advantages to be so close to all the goodies in the store. Look at all the licorice candy piled up right outside the pharmacy. Today was insanely busy, but we will buy some tomorrow after work! :) 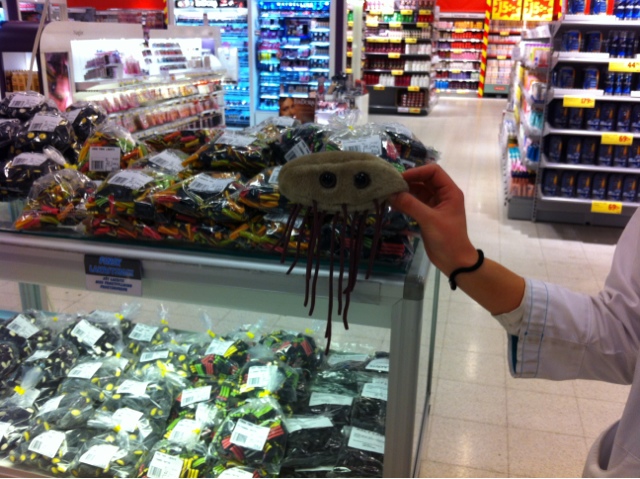 Posted by Annchen at 1:45 PM No comments: