Theatre, trip to Brisbane and crafting

It's been too long since I last posted. I have a bit to catch up on :-)

Hubby bought us tickets to a John Williamson play called "The Club". He remembers studying the play in high school. It's by a well known Australia playwright, David Williamson and is about the internal politics in a football club. I'm usually not big on football but this play was quite interesting and more humorous than I was expecting. It was set in the 70's so it featured the beginning of drug smoking and some male chauvinism - it was fascinating watching people's reactions.

Then this last weekend I had registered to attend a 2 day workshop on feeding difficulties in children. I see this a lot in my work and it's good to keep up to date with the latest interventions. So we started the trip in rain and it stayed like that for most of the trip. There were some patches of sunshine as we drove past Byron and admired the rolling hinterlands.

And today I had a planned day off but as it was still raining what is a girl to do but some craft.

I have all these vintage sheets I have collected and inspired by some tutorials I saw on Pinterest and a business called "Naughty Shorts" I am going to turn them into dresses - can't wait to finish them. 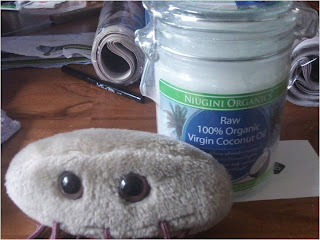 And last but not least - Riki helped me buy some cold pressed coconut oil. Apparently it can help brain function - let's see :-)

Posted by whenindoubtsew at 12:52 AM