Friends of ours invited us to a live music concert - Grinspoon - and I got all excited when I saw who the support band was - Kingswood. Grinspoon is an Australian band who have been around for ages, here's a bit of a blurb from Wikipedia


"Grinspoon is an Australian rock band from Lismore, New South Wales formed in 1995 and fronted by Phil Jamieson on vocals and guitar with Pat Davern on guitar, Joe Hansen on bass guitar and Kristian Hopes on drums. Also in 1995, they won the Triple J-sponsored Unearthed competition for Lismore, with their post-grunge song "Sickfest".
Grinspoon changed their sound to more mainstream rock by their 2002 album, New Detention, gaining fans and peaking at No. 2 on the ARIA Albums Charts; similarly 2007's Alibis & Other Lies also reached No. 2. Their 2004 album, Thrills, Kills & Sunday Pills, which peaked at No. 4, won the2005 'Best Rock Album Award' at the ARIA Music Awards.

The band was signed to Universal Records in United States by late 1998, they were promoted by the songs "Champion", which featured in Gran Turismo 3; "Post Enebriated Anxiety", which was on the international version of Guide to Better Living; "Chemical Heart", via the internet; and a cover of the Prong song "Snap Your Fingers, Snap Your Neck", from Grinspoon's Pushing Buttons EP, which was included on ECW: Extreme Music."
Here's a clip

But the highlight for me was Kingswood - the lead singer does the best vocals!!
http://www.triplejunearthed.com/KINGSWOOD
This is the link to the Triple J Unearthed website where you can download new artist music for free :-) But I also purchased their EP on iTunes this morning - sweet!!

Blurb from their website:
KINGSWOOD are a four-piece indie rock outfit from Melbourne Australia consisting of Fergus Linacre (lead vocals), Alex Laska (lead guitar & backing vocals), Jeremy Hunter (bass & vocals) and Justin Debrincat (drums & backing vocals).
After touring Australia in their own right and with such acts as The Living End, British India and The Saints, numerous festival appearances such as Splendour In The Grass, Queenscliff Music Festival and Pyramid Rock, and releasing 3 killer singles "Yeah Go Die", "Medusa" and "She's My Baby", 2012 has been a massive year for KINGSWOOD.
Don't miss your opportunity to experience one of Australia's hottest acts live.

We started off by trying to find a place to eat. We tried Cafe Fiasco for pizza but they were fully booked. Walked by a whale sculpture fountain down by the Jetty on our way - we have awesome whale watching. Humpback whales cruise past Coffs Coast on their way north in early winter and, after giving birth, the whales and their calves make their way back south in spring. 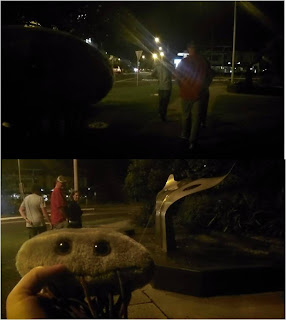 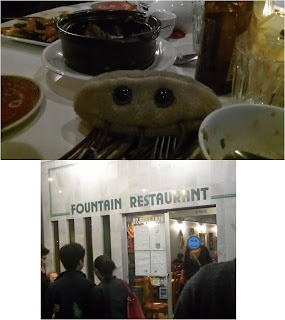 Then onto Cold Rock Ice creamery - where we shared a mango sorbet with a Bounty bar (chocolate covered coconut) smashed in with it - yum!! 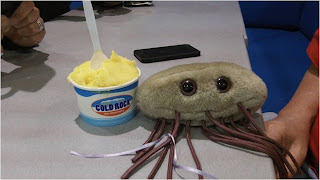 Then onto the gig - we'd missed the first support act - Emporers - but where there just in time for Kingswood - woot!! My favourite song's are She's My Baby, Ohio, Medusa and their cover of First Aid Kits "Wolf". Then a break and Grinspoon came on - the crowd got a bit crazy so I stood up the back with hubby and got a few awful pictures 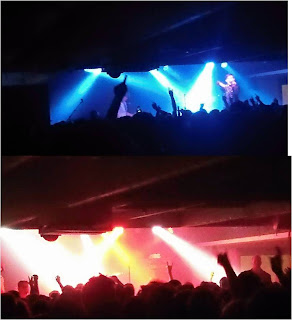 We had left our puppies inside as it's getting cold for winter. We found they had no trouble entertaining themselves by trying to get into a peanut butter jar and a skim milk carton :-( Could of been worse! 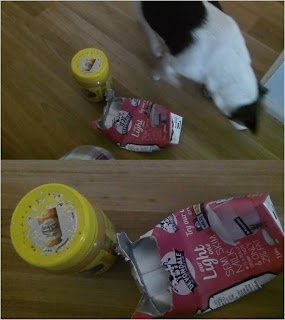 Hope everyone is having a great weekend :-)
Posted by whenindoubtsew at 3:34 AM